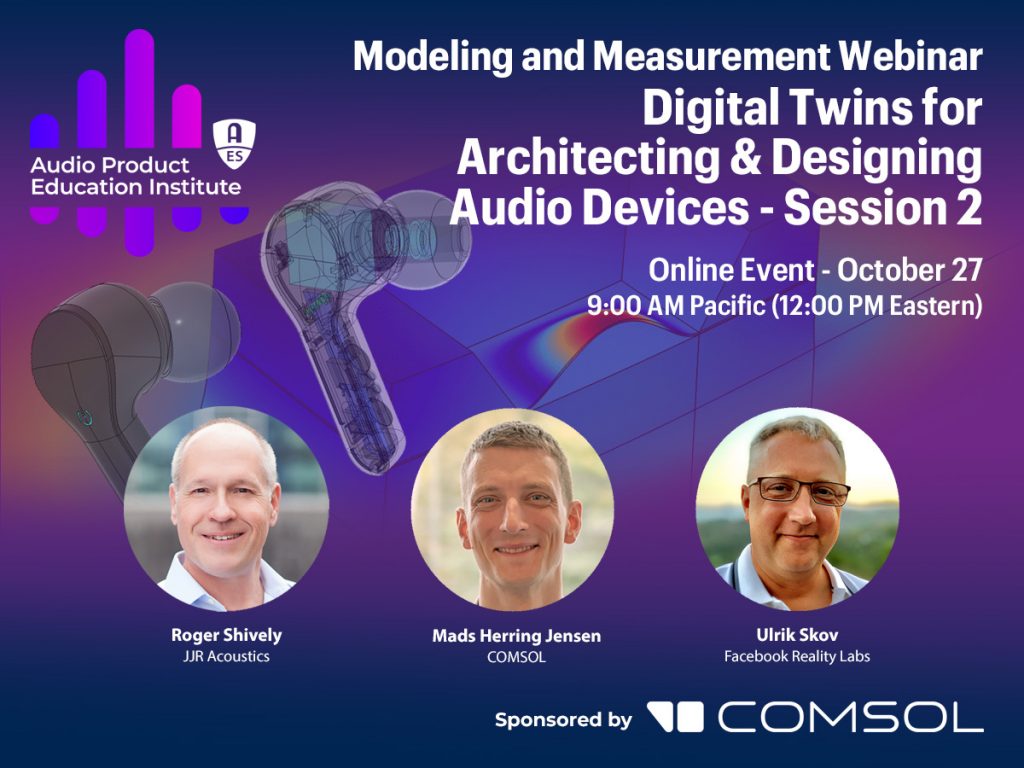 The AES Audio Product Education Institute (APEI) presents the second webinar on the practice and benefits of simulation-driven audio architecture design by use of Digital Twins. In this series of Modeling and Measurement online events, experts from COMSOL, JJR Acoustic and Facebook, discuss the role of Digital Twins and how to influence fundamental design considerations, even before the first prototype is built to proof a concept. This session will describe and detail a real virtual architectural design story.
In audio product development, computer modeling and simulations are often used to troubleshoot and optimize acoustic performance once fundamental design assumptions have been defined. And yet, the largest gains in audio performance are consolidated in the very early architectural design phase, where the form factor, transducer choice, and placement dictates the overall acoustic product performance. What if “high fidelity” Digital Twins and advanced experimental transducer identification was used to influence the form factor, transducer type and tuning decisions even before the first prototype is built to proof a concept?
This webinar series – click here for Session 1 – focuses on how experimental transducer and virtual simulation-driven audio architecture explorations can work alongside, impacting the very early product development cross-functional discussions with PM (Program Management), PD (Product Development) and ID (Industrial Design). With expert contributions from COMSOL, JJR Acoustics, and Facebook, the webinar series will share methods and experiences on how to meet PMs desired audio user experience, PDs manufacturing strategy/story, and IDs aesthetics and function. The presentations will also explore the corresponding strategies to inform and qualify the first physical prototype made for proof of concept, and validate a commitment to investment on a product idea.
A Case Study
In this second webinar Roger Shively (JJR Acoustics) will present a real case study of Virtual Architectural Design by DigitalTwin, followed by a detailed description of the model and explorations using Comsol.
In the detailed example, a true wireless stereo earbud design required a new approach for the microphone implementation. “A manufacturer of lower cost TWS earbuds was experiencing spoken word quality complaints from its customers, but not consistently across product models. Through measurements correlated to subjective evaluations by trained jury, three of their product models showed similar frequency response issues for the microphone. Resonance and anti-resonance issues were related to mechanical design, and improvements to the mechanical details of the microphone fit and position were to be considered. A digital twin of their most important product SKU was made with a COMSOL multiphysics model. This model was used to determine the optimal location and integration of the microphone for this earbud design, then prototyping was begun,” Roger Shively explains.
The identification of the problem, simulation explorations, and the model solution determined will be described. The original design will be then used as a reference for further explorations and simulations of other possible solutions. The case study also shows how finding a good solution inspires manufacturers to explore and do more using the virtual architectural design approach.
Measured data on the microphone for the original design, model calibration, “problem” and error characterization and identification, and presentation of the optimal result planned into the model, will all be discussed. The session will also explore how the digital twin can create a platform for expanding original product designs involving multiple departments and a contracted ODM.
“Similar designs and new design considerations would start from these lessons learned with similar modeling techniques applied during the product concept stage, before a mold for the first prototype was even considered. The investment in simulation was similar to opening a mold, but saves the manufacturer from the cost of prototype iterations and testing cycles,” Roger Shively adds.
Agenda:
– Introduction to case study.
– Problem description.
– Why a simulation driven approach – why not just another prototype and experimental measurements? (Roger Shively)
– How was the problem addressed and solved with COMSOL? (Mads Jensen)
– How was the device architecture influenced/impacted? (Roger Shively)
Q&A
Next Session:
November 17 – Modeling and Measurement
Digital Twins for Architecting & Designing Audio Devices – Session 3
Combination of Factors – High-Fidelity Poroacoustic DigitalTwin

Roger is a Co-founder and Principal of JJR Acoustics. He has over 34 years of experience in engineering research and development, with significant experience in product realization and in launching new products at OEM manufacturers around the world. Before co-founding JJR Acoustics in 2011, Roger worked as Chief Engineer of Acoustic Systems as well as functional manager for North American and Asian engineering product development teams in the Automotive Division of Harman International Industries Inc; a journey that began in 1986.
Roger received his degree in Acoustical Engineering from Purdue University in 1983, and finished post-graduate work in the field of finite element analysis. He is a member of the Audio Engineering Society, Acoustical Society of America, and Society of Automotive Engineering. He has published numerous research papers and articles in the areas of transducers, automotive audio, psychoacoustics, and computer modeling. Roger also holds US and International Patents related to the design of advanced acoustic systems and applications particularly in the field of automotive audio. Roger is Co-Chair of the AES Automotive Audio Technical Committee.

Mads Herring Jensen joined COMSOL in 2011 and is the technology manager for the acoustics products. Mads has a PhD in computational fluid dynamics from the Technical University of Denmark. Before joining COMSOL, he worked in the hearing aid industry for five years as an acoustic finite element expert. 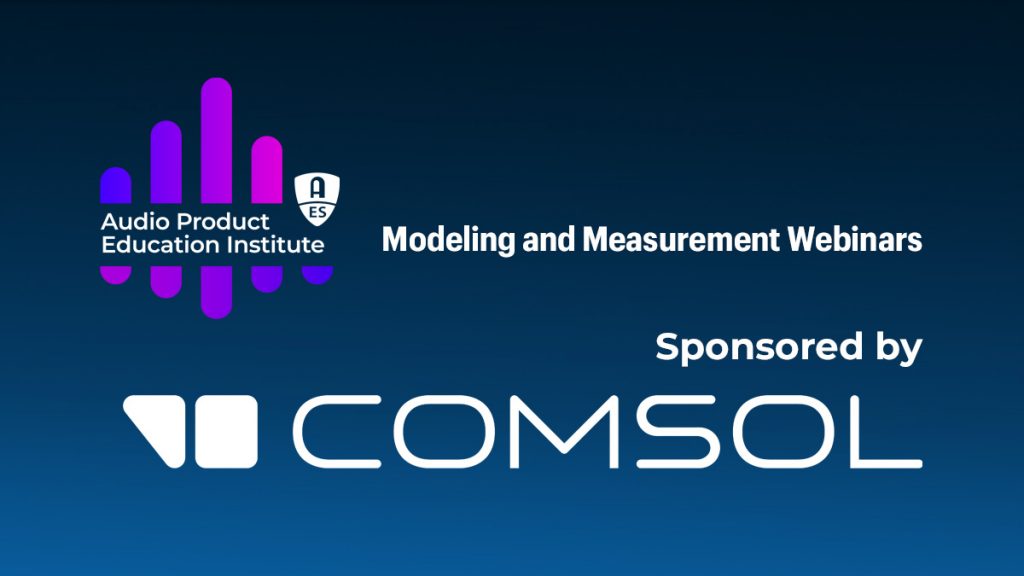